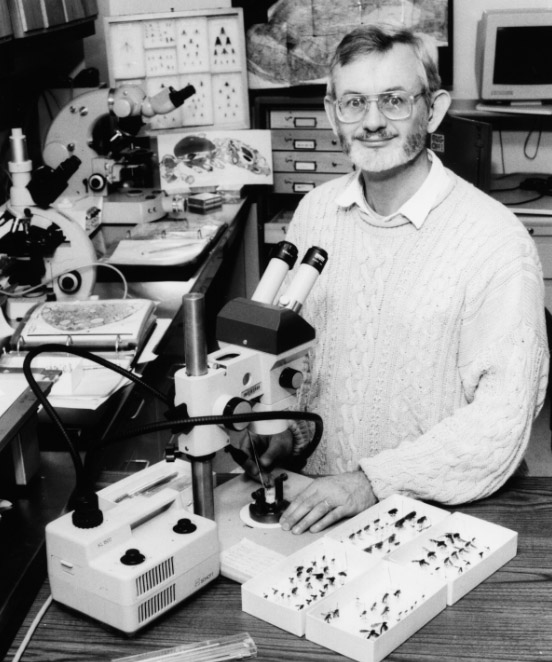 Dr. David King teaches cell and tissue structure in the School of Medicine and evolutionary biology in the College of Science.  He is currently investigating the role of mutation in the regulatory function of repetitive DNA.  Although he began his research career examining nerve cells with an electron microscope, his interest in the cellular basis for behavior eventually led him to study genetics as well.  A postdoctoral fellowship provided an opportunity for him to practice microscopy with the laboratory fruit fly Drosophila melanogaster, an animal well-suited for research into fundamental principles of heredity.  He continued working with fruit flies after coming to SIUC in 1978, where he also studied many other fly species collected from the diverse natural areas of southern Illinois.

The intricate cellular anatomy that Dr. King observed in various flies inspired him to wonder how such complexity could evolve.  [Patterns of Axon Diameter, figure.]  Evolutionary change occurs when natural selection favors some genetic variants over others, with raw variation supplied by mutation.  For many years, most biologists have believed that all mutations originate as accidents or mistakes when DNA molecules are copied.  However, the successful evolution of structures as complex as the nervous system may require a somewhat more orderly process for generating hereditary variation.  Reasoning from a hypothesis that some cellular mechanisms for causing mutations might themselves be shaped by evolution, Dr. King and his colleagues have proposed a functional explanation for a significant but puzzling feature of the genetic material.

A surprisingly large proportion of DNA consists of tracts in which nucleotides (the "letters" of the genetic code) form a short sequence that repeats over and over in tandem (e.g., CAGCAGCAG...).  Unlike familiar nonrepetitive genes which mutate only rarely, these repeating tracts experience frequent alterations.  Such repetitive and mutable DNA is often described as genetic "junk" that serves no useful purpose.  Sometimes repeating DNA tracts can even be harmful.  For example, several hereditary neurological disorders, including Huntington's disease, spinocerebellar ataxia, fragile-X syndrome, and myotonic dystrophy, are all caused by excessive repetition of DNA triplets.  But if repeating tracts can be so troublesome, why are they so common? By the mid-1990s, researchers had learned that the number of repetitions in repeating tracts could influence the activity of associated genes.  However, this new knowledge only deepened the mystery.  Why should a function as critical as gene regulation be so often linked to mutation-prone tracts of repetitive DNA?

Dr. King surmised that mutability might actually be an advantageous function for repeating tracts.  Special properties of repetitive DNA promote mutations whose typical effects are small.  The resulting genetic variation can help a population adapt in a variable and uncertain world.  In effect, a repeating DNA tract acts like an adjustable "tuning knob".   [Tuning Knobs, figure and abstract.]  It allows a relatively efficient process of trial-and-error "twiddling" to find just the right setting for a hereditary trait.  Frequent mutations in repeating tracts might thus be evolutionarily useful, even though they cause disease in some unlucky individuals when a knob receives too large a twist, all at once.

According to modern evolutionary theory, particular mutations happen at random with respect to possible future needs of a species.  Indeed, mutations often cause harm.  Similarly, scattered seeds fall by chance and often land in places where they cannot grow.  But just as seeds can be formed with clever contrivances like wings or hooks to assure their wide dissemination and increase the odds that some will be successful, so also genes can be shaped to mutate in ways which increase the likelihood of beneficial outcome.

Dr. King is currently employing computer simulations to explore circumstances under which mutability can be favored by natural selection.  [Mutational Landscape, figure and abstract.]  He is optimistic that further understanding of mutation will illuminate the cellular processes by which genes inform complex patterns of behavior and biological organization, from the precise instincts of flies to the versatile human brain.