Mutational Landscape.   Computer simulations of evolving populations illustrate the concept of an abstract "mutational landscape", where survival in a changing environment depends on the characteristic rate and size range for random mutations.  (Adobe Acrobat file) 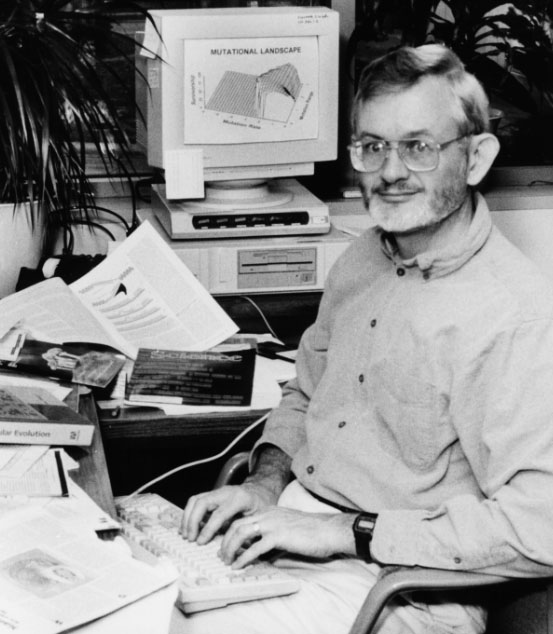 INDIRECT SELECTION AND THE MUTATIONAL LANDSCAPE
The "adaptive landscape" is a familiar metaphor of modern evolutionary biology in which the fitness values of various genotypes are mapped as an irregular topography, with higher elevations representing regions of greater fitness.  Natural selection normally moves a population uphill toward an "adaptive peak".  Mutations permit exploration of novel genotypes and may lead to higher points on the adaptive landscape.  Such trials may be especially helpful when changing environments alter the shape of the landscape.
However, mutability itself is generally regarded as disadvantageous because reliable reproduction depends on accurate copying of genetic information.  Mutability can be advantageous only if constrained so that deleterious effects of random mutations are not too severe.  Computer simulations of evolution in fluctuating environments reveal a "mutational landscape" in which average fitness over many generations depends on both the rate of mutation and the range of effects that mutations can have.  When these parameters are themselves permitted to vary and evolve, indirect selection moves the population uphill on the mutational landscape.  (Adobe Acrobat file)
Mutability becomes advantageous when random mutations occur frequently but have a small impact on fitness.  Similar parameters characterize microsatellite DNA sequences, which are commonly found as regulatory elements in functional gene complexes.  These simulations thus support the hypothesis that such sequences could have evolved as "tuning knobs" to facilitate evolutionary adjustment of gene expression.  [Tuning Knobs, figure and abstract.]